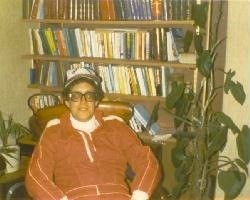 My name is Alan, and one night in September last year there came the perfect storm – a bad day on the golf course, a sleepless night and eBay. And a brooding 69 year old with haemophilia thinking, ‘There’s only so much golf you can play’ and ‘What did I used to do that really made me feel alive?’

And then I remembered car rallying. (Stage rallies are where you drive a car around a planned route, sometimes through forests, sometimes on airfields, and sometimes race tracks with rough off track bits thrown in.) 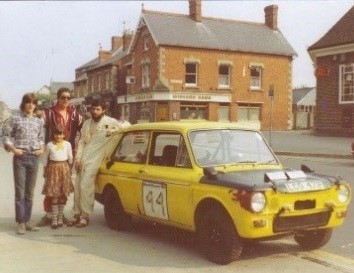 There I was back in the 1970s, all hair and enthusiasm, throwing my little Imp around the forests of Wales. I was partnered by an Israeli guy who came for the weekend and stayed a year (but that’s a whole different story) and pit crewed by Steve, who could put cars back on the road after they had been through the crusher! We were having the time of our lives!

I went onto eBay, just to have a look at what’s around these days – after all this was all nearly 40 years ago. There were lots of interesting rally cars, but all a great deal of money (£10,000+). And then I found this little Rover 214l Enduro, cheap at £1,600, and having come fifth in the Paris to Peking rally – was this the car for me? A phone call the next day, a train ride and a trip to the bank – the deed was done and I rode home in my rally car.

Little did I know how much things had changed. A friend queried what research I’d done before taking this step. None. The same friend wondered if I should have done some – well, yes, but that’s not me. When that by now ex-friend passed comment on my stupidity and maybe my ageing brain, it was time to prove a point. I took Brian (as the little car had become known) off to Mark, who ran the local rally garage.

Proudly I showed him my purchase and ventured the opinion that I didn’t think it would take much to sort her out ready for a rally soon. Mark agreed, and thought he could do the job for something approaching £4,000. He then started to tell me how much had changed, how the demands of safety had upped the cost, how my car would need new seats, harnesses, automatic fire extinguishers, safety film – the list went on and on. But ‘faint heart never won fair rally’ so I asked him to get Brian ready while my sons and I went off to buy our kit and get our competition licences.

Down to Silverstone Rally School to be taught the arts of the rally driver: the handbrake turns, power slides and front wheel drive drifting that we would need. A written test… we passed and were ready to do our first rally.

A place came free on the Brands Hatch Rally a couple of weeks later. Neither boy could come so Mark offered to co-drive for me. Mark is an A Class driver so to have him next to me was both an amazing chance to learn and totally terrifying.

I set off the day before to get the car through scrutineering, sound check and all the other things one needs to do, only to have the Landi that was towing the car break down on the motorway. Sitting in the cold waiting for the RAC I began to wonder about the wisdom of all this. After the RAC sent a truck with no tow bar so it couldn’t rescue me I sat for another hour. At last the second truck arrived – again no tow bar so I sat for a further hour! At last the right tow truck arrived. Three hours in the cold on the side of the motorway – was someone trying to tell me something? 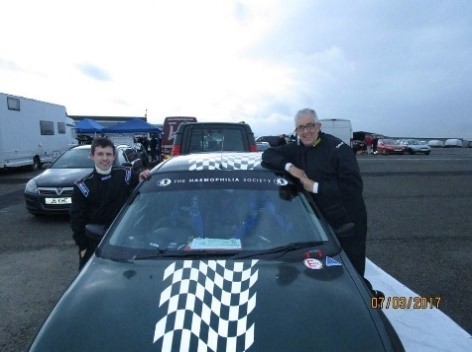 Having arrived at Brands Hatch too late to get the car through that night Mark and I agreed to meet at the course the next day at 7am. It was cold but bright. A trip through the checks and we were ready, apart from needing better tyres. Off to the tyre truck and Brian soon stood proud and square on her new full race tyres.

Soon we were off on the first stage, very nervous, waiting for the light to go green for us to start and then flat out into a left, up the hill, sharp right, down to a hairpin… I thought I was flying! On the other hand, Mark was yelling through the intercom that this wasn’t a Sunday afternoon drive, had I forgotten where the gas was, and other things far too adult to list here. Suffice to say that very soon we had hunted down the car that had started 30 seconds before us and were on our way to fourth place in class.

At this point a red mist came down and my language deteriorated as the driver in front wouldn’t get out of the way. Mark was on the horn, I was flashing the lights, but to no avail. All that fury and they maybe cost us five seconds on a seven-minute stage.

Repeat this five times and I was beginning to tire; as we lined up to start the sixth stage we were told it had been cancelled and the rally was finishing. A car had gone into the Armco, the driver and co-driver were being rushed to hospital and the Armco was so badly damaged that the course had to be closed. I know the sport can be risky but seeing an ambulance come very slowly out of a stage is really scary, somehow worse than seeing it come out fast.

The next week was Donnington and this time we went out with The Haemophilia Society branding on the car. Chief executive Liz had reminded me that maybe I should get insurance cover before I went on a stage event but somehow there wasn’t time. And anyway, was it going to happen to me? Of course not. However, this time my son was driving and I was co-driving – my job was to call the corners and encourage him to step on it.

Bill had never driven a stage before so I expected the first few stages to be quite slow. How wrong could I be? That young man is a natural and very soon was doing things with the car I could only dream of. I don’t remember feeling so scared, so alive and so wonderful for many a year. We had a wonderful day.

Just as important, we talked to quite a number of people who had heard on the tannoy that we were supporting The Society and had come to talk to us. Some had relatives with bleeding disorders and some just wondered what it was all about. I felt it was a good place to talk to people and that we did a level of education that made the branding worthwhile.

Should people with haemophilia do dangerous sports? In my view, yes, if you can. You take all the safety precautions on offer, you assess the risks and plan for them, and then you go and just do it! I may be 70 next year but I fully believe that 70 is the new 16!

For all media inquiries connected with the Infected Blood Inquiry contact Jessica Bomford on 07973 407 011 or jessicab@haemophilia.org.uk